Early notification of the 2023 joint celebration of the 850th anniversary of Shinran Shonin’s birth and the 800th anniversary of the establishment of the Jodo Shinshu teaching has been received by our Canadian Bishop Tatsuya Aoki who, in turn, distributed the information to JSBTC members.

Bishop Aoki noted: “Traditionally, overseas participants are combining the attendance to the service in conjunction with the World Women’s Convention which is scheduled on May 11th and May 12th, 2023 in Kyoto.”

In his note, Bishop Aoki said the Women’s Federation of JSBTC and Rev. Y. Ouchi, the adviser, have been in touch with a Kintetsu Travel agent and possibly Japan Travel Bureau for a group trip to Kyoto.

The Bishop said he did not have information about the Women’s Convention currently, but reported the first registration for the service (not WF convention) is from October to December, 2021, and the second registration is from February to March, 2023. Hongwanji will try to estimate as well as organize the seating capacity for 2023.

He added he will consult with Rev. Grant Ikuta who led the tour in 2012 and Rev. Ouchi who will lead the tour in 2023 so that Canadian attendance can be coordinated. A ministers’ meeting is scheduled in August, at which time he said he can coordinate and plan with the sensei about the celebration and Women’s Convention.

Further information about the celebration and convention will be forthcoming as the time approaches the established dates. 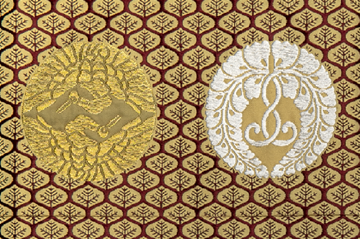 The commemorative design features two crests that are embossed over a reddish-brown brocade background. The background pattern consists of pine needles woven within a ginkgo leaf-shaped silhouette. The two crests are comprised of the sagarifuji (hanging wisteria) and tsuru (crane) motifs.